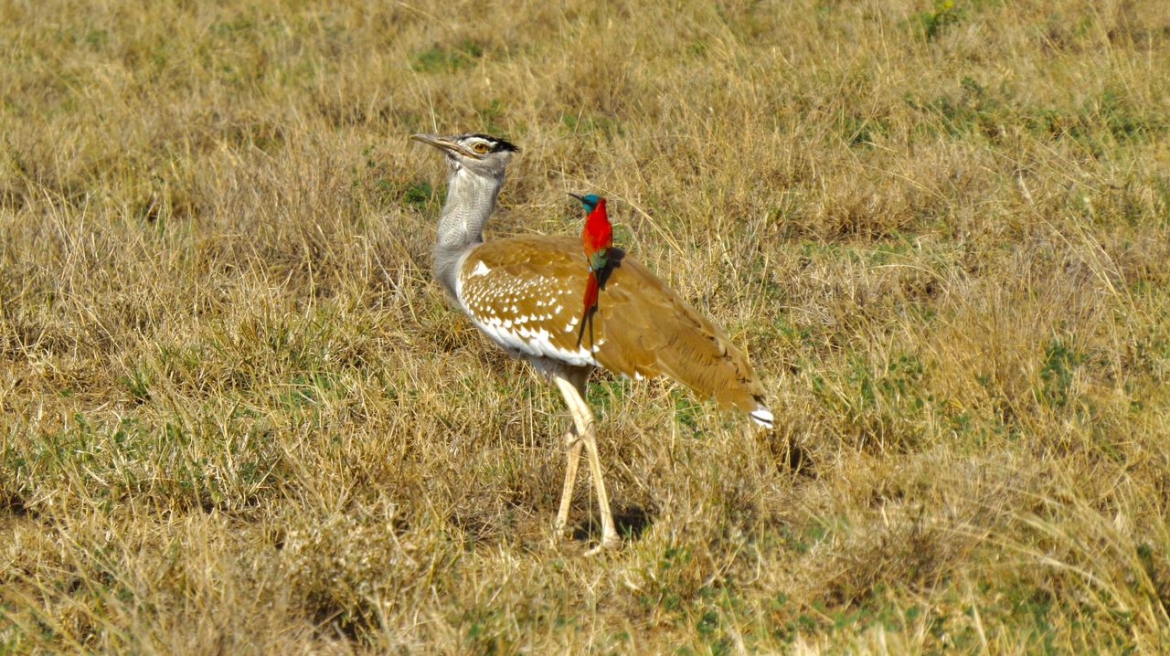 Songs of the forests
The highland forests are home to birds less easily seen. Their song is usually the first sign of their presence. The Abyssinian Catbird has one of the most beautiful calls, the male and female performing a duet in the seclusion of thick bush. The Black- Headed Forest Oriole has a distinctive call and its yellow color shows clearly in the upper storey of the tall trees it favors. Two endemics are found in the southern edge of the plateau, in the Yabello area. These are the White- Tailed Swallow , and the colorful Prince Ruspolis Turaco . The last is on the endangered species list.

Lowland Birds
Lowland Birds It is among the lowland birds that bird-watchers find more birds with which they may be familiar from neighboring Eastern African countries. These areas are especially rich in seed-eating and insectivorous birds, as there are the various Weavers, Cut Throat Finches Wattled Starling and the Namaqua Dove.

Bird life at bale The highland
plateaux are home to many endemic species, and Bale Mountains National park harbors some of them. Among these are the Blue- Winged Goose , whose closest relative is in the Andes mountains of South America. The Spot- Breasted Plover is very striking and can be seen in large numbers at some times of year. The comical Rougets Rail is often seen in grass clumps near water, its tail flashing white as it is flicked up and down. The Yellow-Fronted Parrot is usually first noted by its call and its typical fast parrot flight through the tall juniper trees.

The Banded Barbet is found over a large area; its chest is streaked with black. The Golden- Backed Wood Pecker has a striking golden color and will be seen searching the bark of the st. Johns wort trees in highland areas. On the other hand, the Abyssinian Long- Claw is ground dwelling, its bright yellow throat and chest a strong contrast to its black necklace. The White- Winged Cliff Chat has, as its name suggests, a white patch in the black wing and will be seen on cliffs or even on tall buildings in Addis Ababa. Ruppells Chat is confined to the western highlands and is again seen on cliffs, often darting from the road as a car approaches, its white wing patches showing clearly.

The White- Backed Black Tit is often missed because it is small and likes the shelter of trees. Large parties of Black- Headed Siskins are seen at high altitudes, often in the moorlands. White- Billed Starlings are in the Red-Wing group of Starlings and are distinguished by their ivory- white bills. In the group of seed- eaters, or serins, three are considered endemic, though there is some discussion over this. These are the Yellow- Throated of the Sidamo area and the Ankober and Salvadoris seed- eaters . Harwoods Francolin is a little- known species found only in the gorges of the western highlands leading in to the Blue Nile gorge. It is the extensive high- altitude plateaux that form the quintessential Ethiopian habitat - for birds in particular , but also for other forms of wild life. Most of the endemics are to be found here, as well as a considerable number of other species. Some of the richest areas are the small patches of natural forest on gorge edges, in inaccessible valley bottoms, and the often sacred groves on hilltops and around churchs.


Birds in Simien Mountains
Birds in Simien Mountains Well over fifty species of birds have been positively identified in the Semien Mountains National Park. This includes an unusually large number of birds of prey and carrion-eaters. One of the most spectacular of these is the Lammergeyer , or Bearded Vulture . This magnificent bird with its three-meter wing spread is unusually common in the Semien, though it is found also in other parts of Africa, Asia and Europe. Its diet makes it one of natures rare phenomena: it eats bones and bone marrow. When an animal dies, the lammergeyer waits until the bones have been picked clean by other scavengers, then it eats the smaller bones. The bigger bones it carries away. to a flat, rocky spot over which it sails like a bomber and drops the bone from a height sufficient to shatter it to bits. When the bone is broken to manageable size, the lammergeyer eats the pieces. Lammergeyers have been known to fly as high as 25,000 feet in the Himalayas, and they have been clocked at 79.5 miles per hour flying speed. The Augur Buzzard is another species commonly seen in the national park.

It occurs in several color variations. Adults are characterized by dark gray or almost black upper parts and a bright chestnut-colored tail. The underside may be completely white, white with a black throat and upper breast, or entirely black. The latter form - the melanistic phase - is somewhat more common in the Semien than elsewhere. Another interesting bird is the Egyptian Vulture , which has joined man, the chimpanzee, the sea otter and a few others in an exclusive clique of creatures who use tools. Eggs form a part of the diet of the Egyptian vulture . If the egg is large and difficult to crack, the vulture picks up a stone with its beak and throws it at the egg until the shell cracks. Egyptian Vultures have been seen opening ostrich eggs in this fashion. Other large birds which may be seen include the Ruppells Griffon Vulture , the Hooded Vulture , and the Lappet-Faced Vulture .

Of the species endemic to Ethiopia, the most readily observed are the Thick-Billed Raven , the Wattled Ibis , and the White-Collared Pigeon. The Thick-Billed Raven is unmistakable. It is one of the largest of the ravens and its bill seems to be aspiring to the proportions of a toucans beak. This Raven has a deep, wheezing croak, like a frog with asthma. It often frequents campsites, looking for garbage. It may be joined there by some related birds, the Fan-Tailed Ravens , Cape Rooks and Pied Crows


Bird life at the Lakes
Bird life at the Lakes Ethiopias lakes are famous for the sheer numbers of birds they harbor. In fact at each of two locations in the Rift Valley over 50% of all Ethiopias bird species have been recorded, because of the proximity of numerous aquatic and terrestrial habitats. These are the Awash National Park with Lake Basaka and the Abijata-Shalla Lakes National Park. Abijata is a feeding ground for numerous great white pelicans and Various sorts of Flamingos , as well as flocks of Little Grebes . The Pelicans nest in very large numbers on an island in neighboring Lake Shalla, which is almost fishless. Every day the birdshave to thermal up and across the isthmus separating the two lakes to feed.

Every few years Lake Abijatas waters recede spectacularly, causing a rise in alkalinity accompied by major fish die-offs and a change in the algal composition of the waters. The Pelicans then have to fish further afield on lakes Langano, Ziway, Awasha and even Chamo and Abaya, while the Flamingos move further afield into neighboring countries. An island in Lake Shalla, a regular breeding ground for Great White Pelicans , is also known to be a nesting spot for the greater Flamingo . The thousands of ice-pink birds coming and going over the water against the background of the lake shores are as wonderful bird spectacle as anywhere in the World. In the Northern winters the shores of these lakes are ringed with all sorts of waders - Ruff, Plovers, Sandpipers, Stints and many other species well known to bird-watchers of the Northern hemisphere.

At the same time a large number of Ducks , will be found further from the shores, particularly Garganey, Shovellers and Wigeon . The waters of these lakes are especially rich as breeding grounds for the larvae of various lake fly species that in their turn attract thousands of Swallows and Martin s from the North. For the same reason the trees and shrubs around the lakes shores are festooned in gossamer nets of dusty cobwebs as the spiders wait their turn for the hapless hordes as they hatch from the waters each day. Fresher lakes produce a greater quantity and variety of fish. Here the day is punctuated by the haunting cry of the Fish Eagle soaring high above, with the occasional Ospre y in the season. Malachite Kingfishers flit like jewels along the banks and the Pied Kingfisher carries out its spectacular bombing runs on surface fish further out.

In nearby grasslands other Kingfishers species plaque the insects, the lovely duet ting call of the Gray-headed being typical of grasslands in drier areas. The mouth of the Horcallo River, which flows from Lake Langano to Lake Abijata, is an excellent site for bird watching, as it provides fresh water for the birds to bathe. The Goliath Heron and Marabou Stork await fish near the shore or in the case of the latter, watch for weaker birds in the milling flocks. There are also the Black-Headed and Gray Herons , which can be found inland feeding on the grass and crops.

Egyptian Geese are also very common in these areas. Chestnut-Bellied Sand Grouse fill the air in their thousands near the lakes, leaving the water in groups that fly high and fast, wheeling and spinning, while giving their guttural calls. Spur-Winged Plovers are striking as they stand among the trees near the lakes, and the Crowned Plover resides closer to the shore here in more open grassland.