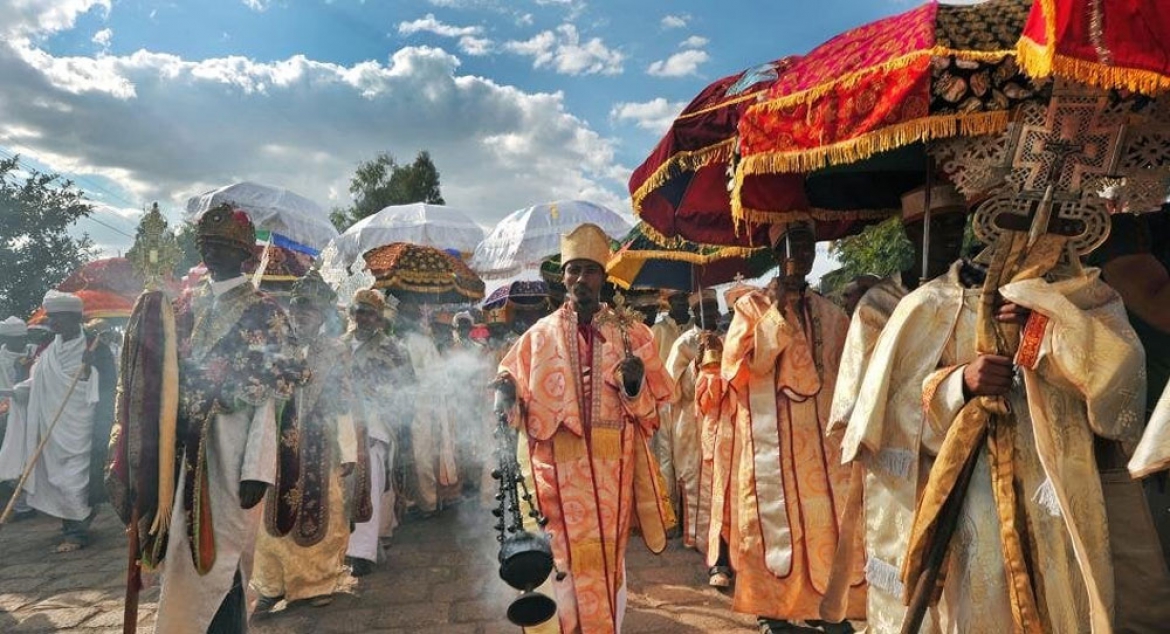 Epiphany (Timket) - Timket, feast of Epiphany is the greatest festival of the year falling on the 19 January just two weeks after the Ethiopian Christmas. It is actually a three-day affair beginning on the eve of Timket with dramatic and colourful processions. The following morning the great day itself, Christ's baptism in the Jordan River by John the Baptist is commemorated. Since October and the end of the rains, the country has been drying up steadily. The sun blazes down from a clear blue sky and the festival of Timket always takes place in glorious weather.

Finding of the True Cross (Meskal)    - Meskal has been celebrated in the country for over 1600 years. The word actually means "cross" and the feast commemorates the discovery of the cross upon which Jesus was crucified by the Empress Helena, the mother of Constantine the Great. The original event took place on 19 March 326 AD. but the feast is now celebrated on 27 September. Many of the rites observed throughout the festival are said to be directly connected to the legend of Empress Helena.

On the eve of Meskal, tall branches are tied together and yellow daisies, popularly called Meskal Flowers, are placed at the top. During the night those branches are gathered together in front of the compound gates and ignited - This symbolizes the actions of the Empress who, when no one would show the Holy Sepulcher, lit incense and prayed for help Where the smoke drifted, she dug and found three roses. To one of the three, on the True Cross of Jesus, many miracles were attributed.

Meskal also signifies the physical presence of part of the True Cross at the church of Egziabher Ab, the remote mountain monastery of Gishen Mariam located 483 km north of Addis Ababa in Wello administrative zone. In this monastery, there is a massive volume called the Tefut written during the reign of Zera Yacob (1434 - 1468), which records the story of how a fragment of the cross was acquired. During this time of the year flowers gloom on mountain and plain and the meadows are yellow with the brilliant Meskal daisy. Dancing, feasting, merrymaking, bonfires and even gun salutes mark the occasion. The festival begins by planting a green tree on Meskal eve in town squares and village market places. Everyone brings a pole topped with Meskal daisies to form the towering pyramid that will be a beacon of flame. Torches of tree branches tied up together called "Chibo" are used to light the bundle called "Demera".