17 Day Itinerary to the North Ethiopia 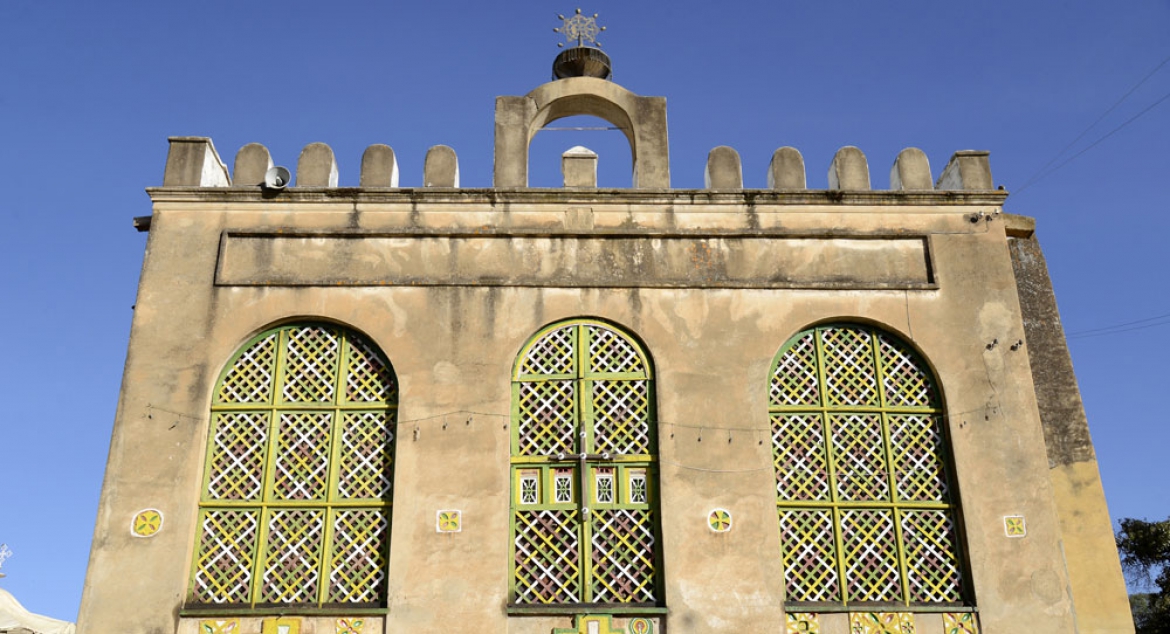 Addis Ababa We will meet you at the airport and take you to your hotel for check-in. The first day we spent in the fascinating capital of the country: Addis Ababa. Depending on your time of arrival we take you on a half day or full day city tour visiting some sites of your choice like the Ethnographic Museum, National Museum, Trinity Cathedral, Mercato (the largest market of Africa) or the Entoto Hills just outside Addis Ababa.

Explore the city of Addis Ababa, founded in 1886. Visit the National Museum, home to the fossilized hominid ‘Lucy’; St. George and Holy Trinity Cathedrals; and, for those keen to see an authentic African market, a walk through the largest in Africa, Mercato.

Addis Ababa – North Ethiopia Bahir Dar In this day you have an option either using land transportation or taking a short flight to Bahir Dar (the shores of Lake Tana, the source of the Blue Nile), where life revolves around the lake and you will find the local fishermen at work in traditional papyrus reed boats. An afternoon hike takes you to the beautiful Tis Isat Falls, also known as the Blue Nile Falls

Bahir Dar A full day of exploration (and contemplation) as you cruise from south to north on Lake Tana. Visit a selection of the remote island monasteries such as Ura Kidane Mehret with its beautiful frescoes, and Narga Selassie in its stunning island setting where time has stood still. Once on the northern lake shores, visit the Church of Debre Sina and back to our hotel.

Bahir Dar-Gondar A short drive through public transportation for about three hours to the old mountain capital of Gondar for about 3 hrs sight seen full day.Gondar has a rich history with its beautiful and strategic mountain setting, the 17th-century capital was once the crossroads of several major caravan routes, and was also occupied by the Italians during World War II. The Art Deco buildings surrounding the Royal Enclosure with its medieval castles and churches are a reminder of this heritage. This afternoon, explore Gondar’s castles and the Church of Debre Berhan Selassie with its iconic ceiling of painted angels

Gondar- Simien Sankaber (3250 m), 3-4 hrs Drive from Gondar early in the morning to Debark the place where the park head quarter is situated where we need to spend about one hour to do entrance fees and pick the scout plus to have tea and coffee before leaving to the mountain, then keep on driving to the place where called Michibiny and start the introductory walk to the first camp site Sankaber for about 6km away before the camp for like 3-4 hours along the escarpment and over night at Sankaber. You will encounter gelada baboon along this hike.

Sankaber-Gich (3600 m), 5-6 hrs We follow the northern escarpment eastward, before we descend a little in to the Kaba valley. After that we continue over a narrow ridge to a cliff where we have a spectacular view of the Abyss towards the Simien foothills. We also find a large waterfall here; the Jinbahir River plunges 500 m in to the Abyss.

We proceed for one and half an hour to the place where we have a lunch at the Jinbahir River. After lunch we walk through the fields of Barley before we arrive at the idyllic village of Gich. Here we can enjoy a traditional coffee ceremony in one of the huts and learn more about local farm life. From Gich village it is a short walk to Gich camp which is a good area to look for Lammergeyer and Thick-billed raven.

Gich-Chenek (3600 m), 7-8 hrs From Gich camp we initially start off through the same fields of Giant Lobelia as the day before, but soon we descent in to the huge Jinbahir River valley. In this way we get a very different perspective of Imet-gogo and the volcanic landscape, where it looks like big chunks of mountains have been blown away.

The trail follows the edge of the escarpment, which is completely vertical for several hundred meters. We climb to summit of 4070m where we will have lunch. After lunch we descend to chennek for about two hrs along a steep trail. From Chennek camp there are spectacular views in all directions. Sitting on a bunch at the escarpment and try to spot Walia Ibex in late afternoon or early morning. Some times Walia Ibex visit the edges of the escarpment.

Chennek-Sona (3100 m), 6-7 hrs Heading to sona, the first three hrs path leads us up to one of the highest Mtn peak in the Simien Mountains called Buwahit (4430m). In addition to the scenic and descent surroundings we will stillrewarding with the endemic wild animals in Ethiopia particularly in the Simien Mountains, Walia Ibex (a goat family).

Then walk along series rocky downhill until we get 4200m for about 30 minutes and proceed down to camp through the edge side trail for another two hours until the towering cliffs of Imet-Gogo appear again. From here it is an easy walk to Sona, where it is situated near by school, just on the opposite side of Imet Gogo and has magnificent widow views.

Sona-Mekarebia (2200m), 6-7 hrs Walking to Mekarebia passing through some parts of Sona village with gorgeous slope side views in the southern direction of the path along a steep downhill walk for three and half hours to a river where we can have a nice swimming which is neither very cold nor very warm called Insia.

Having finished swimming, we need to spend some hours so as to share the life of enjoyable environment and if you are interested there is also coffee ceremony prepared by the local people out of their huts, just under the river which is really special, beside to that we can wash some light clothes that became dirt on the trip. After having a pleasant stay under the river, continue walking to the camp in the late after-noon for one and half hours through observing the bushy surroundings that has small valleys and attractive depressions accompanied by an evening shadow and the moderate weather which is totally different from that of the highlands and over night at established camp.

Mekarebia-Mulit (1800m), 6-7 hrs Heading to the last camp Mulit, what is special in this day is crossing the same river that we had a swim the day before for about 5-6 times which is really interesting with quite lots of bird-lives and surrounded by a tributary river which has a big natural swimming pool called Derek-wonz where there is also a possibility to enjoy for a few hours including lunch break.

Then keep on going for one and half hours a short uphill walk before reaching a small village called Awasza and from this point to the camping place the path leads to a grassy flat land that lies on the left bottom side of Awasza Mountain having a wide plateau that takes less than an hour. Since it is the last day evening we will have a special ceremony with our crews as farewell by having camping fire that accompanied by shoulder dancing ("ESKISTA") which expresses our Ethiopian typical culture.

Muli to Adiarkay and then drive to Axum, night Yaha hotel,Drive to the oldest city in Ethiopia and land of the Queen of Sheba’s ancient kingdom, Axum and you are passing one of the biggest reiver in Ethiopia called Tekeze, launch will be on your way Either Shire or take a launch box and have it on the way.

Axum explore the city Visit the small but interesting museum, the impressive Stelae Fields and also the grounds of the 16th-century Cathedral of St. Mary of Zion, home of the original Ark of the Covenant. King kaleb and his son tombs and the queens of Shiba Bath and palaces etc…

Axum-Gerehalta/Hawzen/ On this day the visit from Axum can be extended to take in the 800 BC pre-Axumite btemple at Yeha, 55 km east of Axum, and a little further, the 7th century monastery at Debre Damo where the only access is by rope. After that keep driving to Gerehalta through scenic landscapes but this monastery is only for mans. It is not allowed for Sightseeing around Gerehalta, mainly the two well known historical rock hewn Churches /Abune-Yemata and Mariam Korkor/.

Gerehalta-Mekele Drive to the capital city of the Tigrian region Mekele. On this day you will still have a chance to visit some of the historical rock hewn Churches like Abriha Hatsibha and others. In addition to it you will see remote villages and the great landscapes of the region. It will be a short driving about 3-4 hrs and you will have a chance to explore the city of Mekele unless otherwise you want to stay another day.

Mekele-Lalibela Drive to the UNESCO World Heritage Site of Lalibela - the Jerusalem of Ethiopia, and Africa’s own ‘Petra’. It will be quite a long driving, but joy full driving through remote villages where you can see the welcoming dancing of the boys and girls when they see you in between and I am sure you will be very impressed by their all activities as the area is notable for the countries shoulder dancing.

Lalibela Before midday explore the monolithic red-hued churches incredibly carved into the rock. Your guide will lead you through the network of crevices and tunnels linking each of the churches. The churches are still in use today.

In the afternoon your guide takes you to the eastern group of rock hewn churches: smaller in size, these are no less impressive, with intricate carvings and many dark tunnels to explore! Travel further afield to the Nakutelab rock-hewn church, built into the side of a hill in a natural cave. The afternoon culminates in a visit to a private home to participate in an Ethiopian coffee ceremony.

Lalibela-Addis The end of the northern visit will be flight back to our capital town Addis. Shopping in the downtown of Addis Ababa, farewell dinner and transfer to the air port.